Question: Why did the chicken cross the road?
Answer: There is no right answer.

Now that we’ve gotten that out of the way: WE HAVE CHICKENS!

Feeling as though no farm experience – urban or otherwise – is truly complete without some sort of livestock, we brought in some short-term egg laying birds. Rentals, in fact.

With the guidance of Homestead Sharon of Rent-the-Chicken, we brought home two Red Star hens. These are hybrid birds, with a Rhode Island Red dad and a mom from one of a few other breeds.

During the recent backyard redo, including new raised garden beds and Wiarton flagstone path, BBQ area and lounge area complete with posts for hammocking – we made sure to carve out an area for the birds – the Girls – leaving enough room to move the small coop around a little bit to allow for easy cleaning of the ground below.

Easy cleaning? Yup, because chickens poop. A lot. And they don’t really give a sh&% where they poop. This so far is the one and only drawback, which itself has a silver lining. Well composted chicken poop is fantastic for the garden, so it can go right into your compost bin and back into the earth once composted.

The eggs – one from each bird every day, like clockwork – are awesome! The yolks are a much deeper yellow, an almost orange colour compared to the often pale yellow of store-bought. The egg white, made up of thin albumen (runny) and thick albumen (gelatinous) are very different from store bought, mostly due to freshness. The thick albumen is really thick, a very satisfying chew. And the thin stuff spreads across the pan (when frying) and crisps up beautifully while the thicker elements cook.

So far, we haven’t yet found an effective way to peel hard-boiled eggs, so we generally don’t bother, and when we do, we scoop out the eggs with a teaspoon. It ain’t pretty, but an egg salad knows not where it came from.

Dixie, our Australian Sheppard urban farm dog, has gotten accustomed to the girls quite well, and vice versa. They were pretty skeptical of each other at first, but within a week, Dixie started letting the birds scratch at her fur and peck out little pieces of dust that they suspect is food. Dixie hardly notices. She’s is learning to herd them away from the back door, and the girls have completely let go of any fear or panic when she approaches. In fact, they’re getting pretty defiant with her.

That said, Dixie is highly trainable and her instinct is to protect and herd animals. If you have dog that is a chaser or a hunter, you will likely need to keep them separated or under a very close watch.

I can’t say chickens are smart. Yet I can no longer say that they are entirely stupid either. They know when someone’s coming, and get very excited at the prospect of being let out to forage throughout our fenced in yard. They know instinctively when to head back to the safety of the coop for the evening. Within two days of being here, they started recognizing the bag of dried meal worms – special treats that we use to entice them back into the coop. And they’ve learned to recognize everyone in the family including the BUFCO crew who come to work every day.

They are definitely social creatures, these miniature dinosaurs, and although they don’t like being picked up or petted, they will nestle into a lap or perch on a forearm once they get comfy. And the neighbourhood kids adore them!

Chickens are not neat. Beyond the aforementioned poop-like-an-elephant behaviour (i.e. wherever they want to), they kick the cedar mulch all over the place, looking for edible bits below. So we sweep once or twice a day. No biggie. In a larger yard, we would likely have a penned off area for them, but in our tiny space, it’s share and share alike. Plus, we take their eggs every day, so fair’s fair.

If you’re thinking you’ll be saving a ton of money by having chickens and their eggs, don’t. Although not terribly expensive (especially if things are purchased once instead of rented yearly), there are some costs such as food and wood shavings for the nesting box (where they lay their eggs). These are not heavy expenses, but I’m not yet convinced that having two to four birds will be any less expensive than buying eggs from a farmers’ market or grocery store. Especially if you buy organic.

And finally, one lovely thing beyond the companionship and endless pleasure of watching these gentle creatures, is knowing exactly what you’re eating because you know exactly what they’re eating. We feed ours certified organic chicken feed, plus they do a great deal of foraging for insects, eat loads of grass and other plant material (we used to have hostas…), as well as fruit and veggie scraps from our kitchen.

All ‘round, it’s looking very likely that we’ll build a coop and purchase birds next year instead of renting.

Oh, and these girls? Colonel Saunders and General Tao. 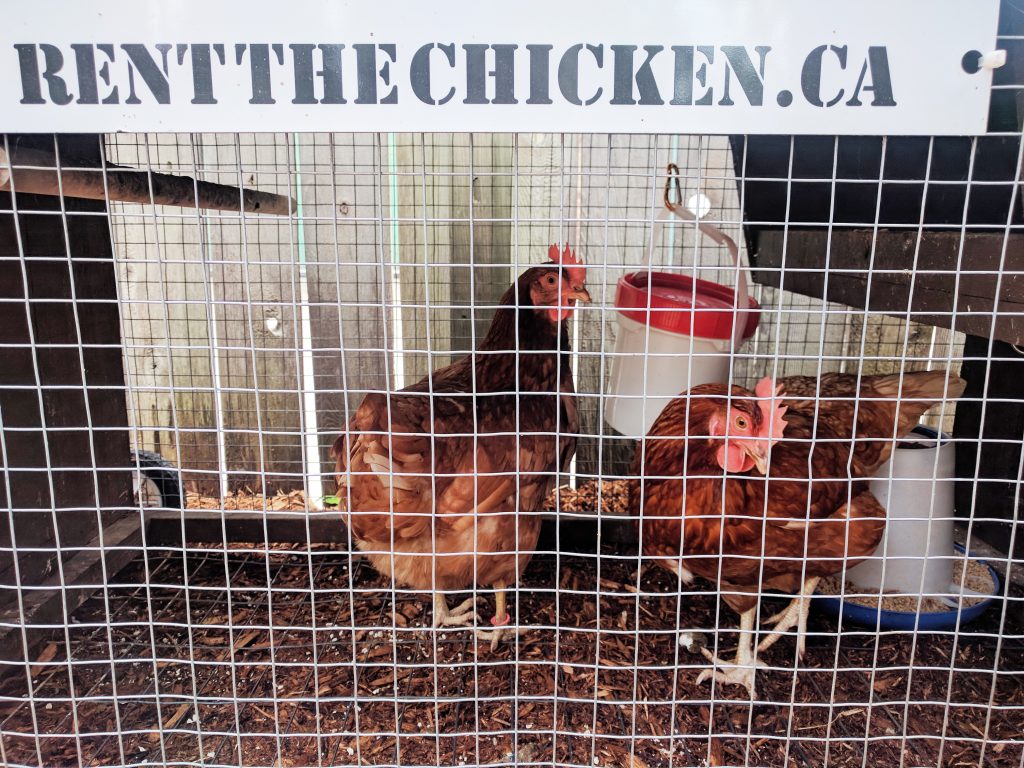 Receive The BUFCO Bulletin to your inbox!